Few bands can declare to have an identification and sound as outstanding as Nine Treasures. Forming in 2010, one of many unique Mongolian people steel bands have one easy purpose: to take Mongolian heavy steel worldwide. Now, the band will hit the US in November for a string of headline reveals. The schedule might be seen under, tickets can be found now.
November
6 – The Grey Eagle @ Asheville, NC
7 – Snug Harbor @ Charlotte, NC
8 – The Pour House Music Hall @ Raleigh, NC
9 – The Riffhouse Pub @ Chesapeake, VA
10 – Baltimore Soundstage @ Baltimore, MD
13 – The Brooklyn Monarch @ Brooklyn, NY
16 – Photo City Music Hall @ Rochester, NY
17 – The Saint @ Asbury Park, NJ 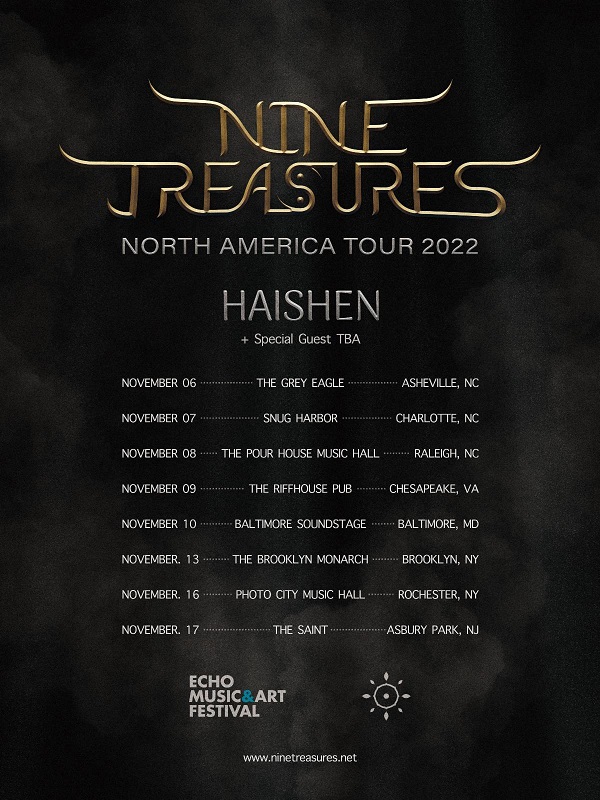 Three albums, tens of millions of streams and several other European excursions and competition reveals later (Wacken Open Air, Woodstock Poland), Nine Treasures are nicely on their approach to conducting their purpose of a Mongolian steel revolution. For vocalist/guitarist and founding member Askhan Avagchuud, it is the best way the band harnesses their distinctive tackle heavy music that units them aside. “It’s always been about the music with us,” he says. “When I started this band, I had no idea how things worked, and I thought it was all about marketing, promotion and fancy videos, but after 10 years of doing this, I’ve realized that everything revolves around the music itself. That’s why our focus is on making our music as great as it can be – we’re constantly progressing.”
The music Askhan speaks of is a singular mixture of old fashioned heavy steel and conventional Mongolian music, which sees Nine Treasures make the most of each standard vocals and Mongolian throat singing. Likewise, guitars, bass and drums collide with conventional string devices such because the balalaika and the morin khuur, leading to a sonic kaleidoscope that follows no set template. Unlike a lot of up to date rock and steel, there are not any guidelines on the subject of Nine Treasures, and that makes the standard of the band’s output all of the extra spectacular.
For a preview of Nine Treasures’ beautiful stay efficiency, take a look at their full set from China’s TaiHu MIDI Festival under.
Setlist:
“10 Years”
“Arvan Ald Guulin Honshoor”
“Nomin Dalai”
“Fable of Mangas”
“Tes River Hymn”
“Us”
“Wisdom Eyes”
“My Hulunboir”
“Praise for a Fine Horse”
“Three Years Old Warrior”
“Black Heart”

Ozzy Osbourne made his return to the stage...